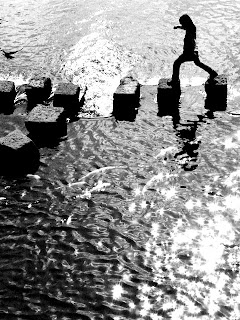 Chasing the bird. In case you didn't notice, the bird on the left hand corner. 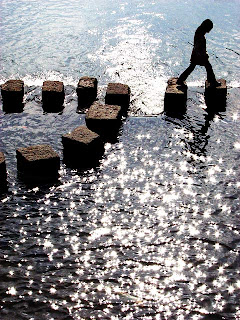 Walking out from the frame. In this picture, I like the blue gradient nuances, and those shiny reflection from the sunlight. 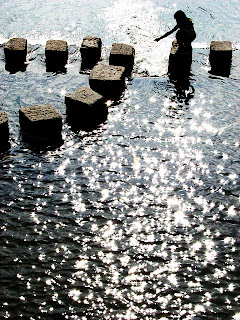 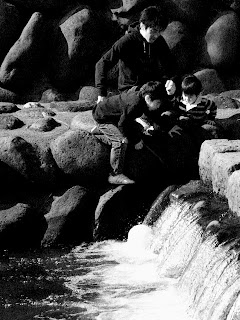 Why do you think the father won't help them get the ball? In my opinion, it was like that so the kids can go through the troubles by themselves. A kind of "do it yourself" method of education (what am I talking about here??). 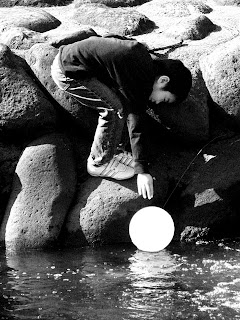 Go my son, take the ball, you can do it! Gambarimasu!!!

That is all, folks!

We, me and two other Indonesian friends, spent few hours here at the harbor, checking the new Nagasaki Prefecture Art Museum and some other buildings, and then took some random pictures around the place. These are some decent results I got. Well, here it goes. 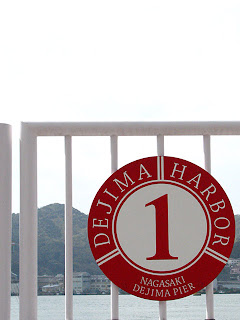 The picture to signify the place. Dejima harbor in Nagasaki. haha.

I took this one inside the harbor administration building. Just a normal Japanese salary man reading newspaper in one composed image. Well, as I said, randomly taken. 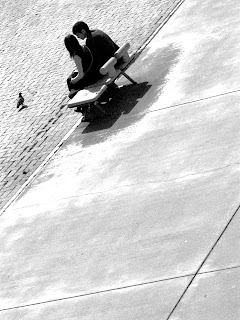 These last two entries are my favorites. The first one, I wanted to picture some "lovey dovey scene", but since I got only one dove, and a couple, then I had to switch the theme to "lonely dovey, oh, i miss being couple". 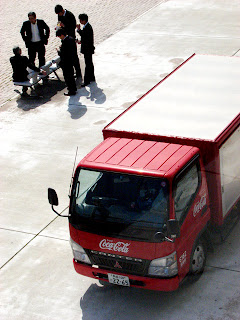 The group and the coke truck. Well, maybe in many ways this one is imperfect picture. But I think I got what I needed from this one. To show there is a bunch of people together, and one Coca Cola truck, alone. It would be nice if only they drank Coca Cola at that time, then I can got even further with the concept, "Always Coca Cola!". Kidding. :)
Posted by subasuba at 12:38 AM No comments:

Dejima through my eyes.

These images are from my visit to Dejima, in Nagasaki. On the 19th century, or so, this place was the Dutch trading port in Nagasaki (as usual, for further information, check on Mr. Wiki ).
The architecture in this place are mixture between those of the traditional Japanese's and some are influenced by the Dutch/ European architecture. Well, enough for the chit chat, here are the images. 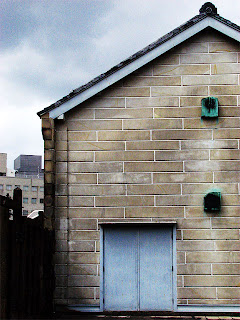 A house, or a storage building, I am not sure, but one sure thing that this building caught my attention since it has the combination of those two architecture poles, noted by the form of Japanese architecture, and the brick material used on the walls, which is from the European (Japanese architecture are mostly shaped by their usage of wooden material). 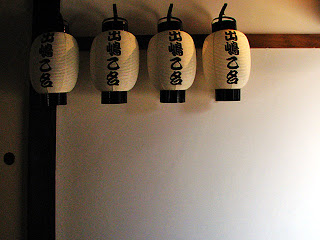 A lining of traditional lamps with some kanji written on it. 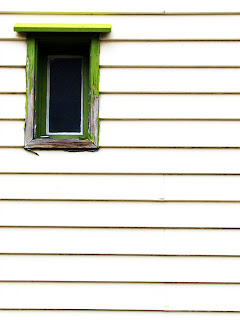 A scene of European architecture in Dejima. The window speaks for the definition, or it seems to be, according to my opinion. 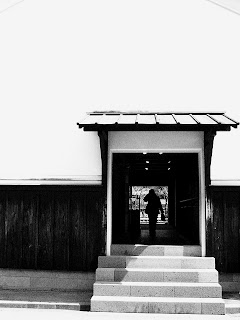 Well, someone's framed pretty well in this one. Like the result on this one.
OK, that is all for this time, I'll try to come up with more pretty images next time. See you soon!
Posted by subasuba at 11:50 PM No comments:

This entry is not about photography nor architecture. This is only a part of me wanting to be exposed in this blog. No, not my body parts, or anything. Just my thought, which I "discovered" today.
I tried to be jazz, to be rock, even be techno but after all i am POP. It is not about music, to be exact, though I used those terms of music genres. It is about my standing point in viewing architecture, or in a broader aspect, the world around me. I love trends, I "learned" a lot from pop culture, enjoying being in the state of having a lot of fun with my life when actually I gotta get serious. Time is ticking, and keep on ticking. Leaving me with a big burden in the end. But yet, I still the same. The POP approach just too thick within my blood. At least for now, and that is not entirely bad thing, because I enjoy being POP.
And being POP in my standing point toward architecture, means that I have a tendency to follow the trends, aware of the latest gossip regarding those so-called trends, and obviously, has no consistency on the way of doing architecture. haha.
So, statement for today is, I AM POP!
Posted by subasuba at 5:55 PM No comments:

subasuba
lifelong learning through a lifelong spiky sandals therapy is good, my friends.